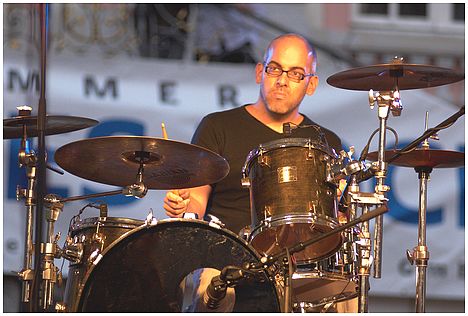 During the second part of saturday’s evening concert programme (18.08.) at Marktplatz the numerous listeners could enjoy for about 75 minutes a concert with contemporary 90ties blues and soul in the style of e.g. Otis Clay, Etta James and B.B. King, presented by the local band Soulful of Blues. Soulful of Blues was founded more than 20 years ago (1987) by blues man Hans-Georg Rehse from Bad Godesberg, who at that time, was a full-time employee in the British Embassy. Highlights for the band were an Uzbekistan- (1997) and a Central Asia-tour (1998). Bandleader, guitarist and singer Hans Georg Rehse, who already appeared on the scene in the 1960’s with his first band, called Blues Express, is the only remaining original band member. At present the other musicians of the busy septet which can be engaged for various private or business events are : Dave Doerr (trumpet), Michael Schaake (saxophone), Michael Zschiesche (trombone), Wolfgang Stürwoldt (keyboards), Rainer Wilke (bass) and Jo Schneider (drums).

This site uses Akismet to reduce spam. Learn how your comment data is processed.